Here’s a magical artifact I created for Frostgrave, feel free to use it in your games. The card is sized for a standard sports-card sized sleeve. If you have any requests for magic items or character cards, hit me up! 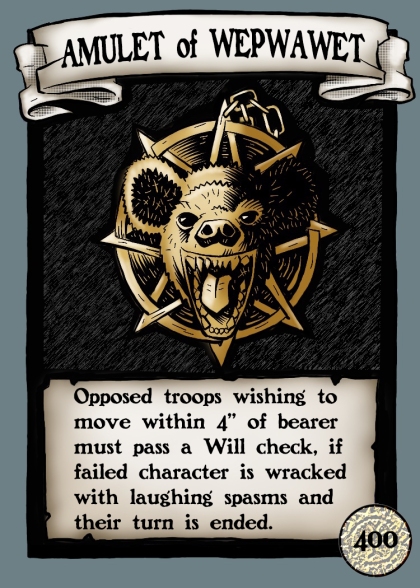 This amulet surfaced a century ago, found around the neck of the mummified remains of a caravan leader. The cadaver was riddled with arrows, with a ring of assumed assailants littered several paces away from the body. The amulet itself is crudely crafted out of dull gold, and prominently features a leering hyena on its face. Scholars researching the artifact reported feeling anxious when they were around it, with one researcher noting that he had observed his peers becoming immobilized with fits of manic laughter. The amulet was reported missing from the Minesterium Obscura  a decade ago, its current whereabouts unknown.

This magical amulet is infused with the spiritual essence of Wepwawet, the trickster god of the gnolls tribes. The wearer of the Amulet of Wepwawet gives off an aura of anxiety, and those that oppose the bearer’s goals may find themselves wracked with waves of spastic, manic laughter. Any opposing figure that moves within 4″ of the bearer will need to pass a Willpower check or they are immobilized with spasms of nervous laughter. The victim can defend themselves if attacked, but their turn is otherwise over. The Amulet of Wepwawet does not appear to affect the undead.

2 thoughts on “The Amulet of Wepwowet”