Research for most monsters can be a lot of fun, and pretty educational, too. Take this week’s Monster Monday inductee, the Redcap. I had no idea that the people of the border region between Scotland and England had their own unique legends. Makes sense, though, given that this area has been contested and fought over for centuries. Conflict tends to be the mortar with which great legends are built.

Redcaps are malicious, foul little fiends that live in the abandoned castles and ruins throughout the border regions. They may be related to goblins, or faeries, or perhaps some sort of inbred cave dwarf, but no one can really tell for sure; most folk that glimpse them are too busy running away to tell. Sadly, this rarely works, as Redcaps are some of the fastest creatures of the Other and can easily catch up with the fleetest of human feet.

Redcaps have long, tapered fingers, weathered faces, and red tinged eyes. They also sport bright red caps, sewn expertly from human skin. Redcaps are vicious and accomplished slaughterers of humans that wander too close to their haunts, and it’s not just for sport, either; the Redcap needs to keep its hat soaked in fresh blood to stay alive. If the cap dries out, the Redcap will die. Needless to say, this rarely happens.

Redcaps are also known to carry long pikes, which they are very accomplished with. They wear heavy, iron-shod boots, which may be worn to lull their prey into a false sense of security, or perhaps to keep them from running too fast to stay in this realm. 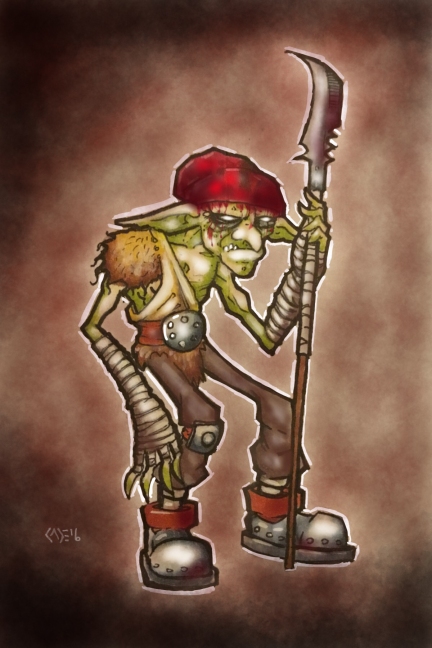 While Redcaps are very common in the Border areas between England and Scotland, there have been several stories of their antics in Ireland, too. The only reliably documented way to defeat a Redcap is to try and hide from them, which is next to impossible, since they tend to know the lay of their lands very well. If you find yourself in the hunting grounds of one of these horrid little beasts, it’s best to make your peace with life; there is probably not much of it left to live.

3 thoughts on “Monster Monday: the Redcap”