Finished up the Hero Forge figures today, plus the Reaper liger. Unfortunately, the yellow reflects a lot of light, which is something I’m going to need to work on for photography. If you’re curious about Hero Forge figs, I would recommend them, and can’t wait to see how they evolve over the next few years! 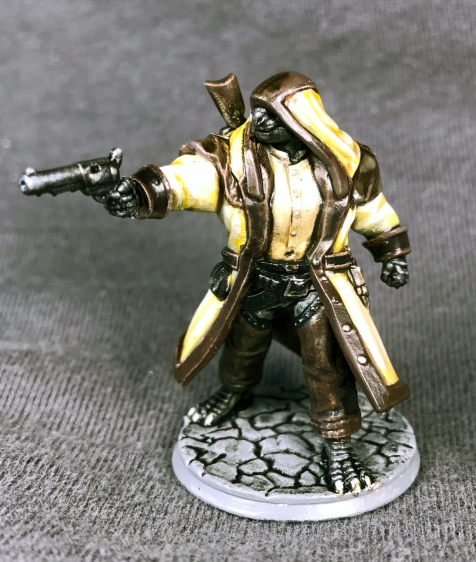 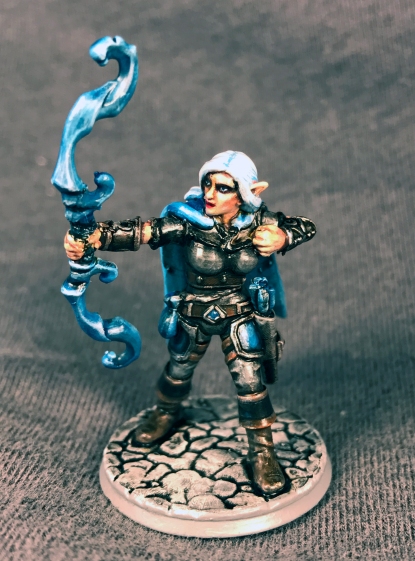 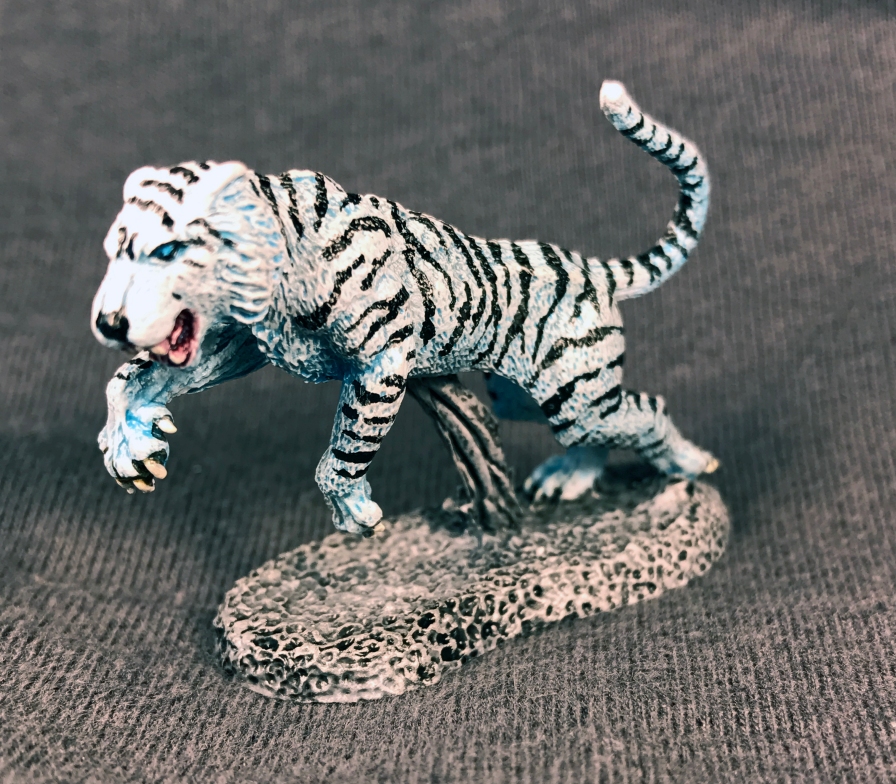 Hero Forge is a cool concept; you use the Hero Forge interface to design a custom miniature. You have a lot of control over pose, build, genre, and costume, and can select different races like cat people or lizard folk. I have always been curious about the miniatures, but never got around to ordering one.

Maren and Josh commissioned me to paint up the figures they designed for their D&D characters, and I have to say I am impressed with what Hero Forge can produce. The figures look really nice, and there is a lot of detail packed into the miniatures. Maren has an Elven Ranger character, and she wanted her to have some aquatic details. Josh has a Dragon Born gunslinger, with black scales and yellow eyes.

Impressions? Maren and Josh opted for the high detail plastics, which look great but are incredibly brittle. The figures have a little bit of artifacting from the printing process, but there is not a single instance of flash, since there aren’t any molds used to cast the figures. I decided to cut the bow on Maren’s Ranger and reinforce it with a metal rod, because I KNOW that figure is going to fall, and that plastic is far too brittle not to break. The miniatures take paint really well, and paint up just like any other miniature.

Downsides? Only a few. There are areas of the miniature that are next to impossible to reach, like the inside of the Dragonborn’s coat. Since the figure is printed from the base up, the coat hangs just like a real coat would, and getting a brush up behind a character’s legs is pretty tricky. Also, for $30, I would hope for a more durable plastic. There is a stronger miniature from Hero Forge that costs less, but the detail is chalky and looks pretty rough.

The gallery below highlights the first half of the painting process, I will post the finished figures tomorrow! 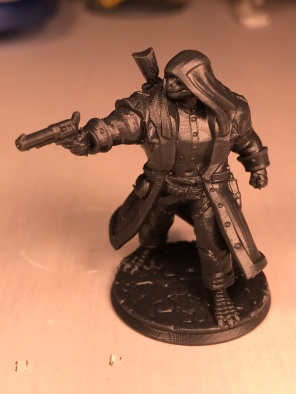 Hero Forge figure as they arrive from the company. 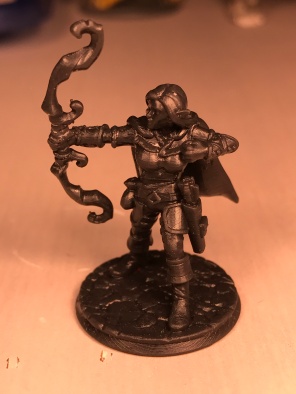 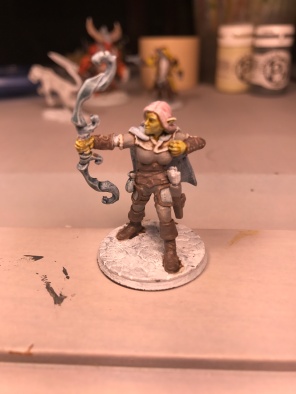 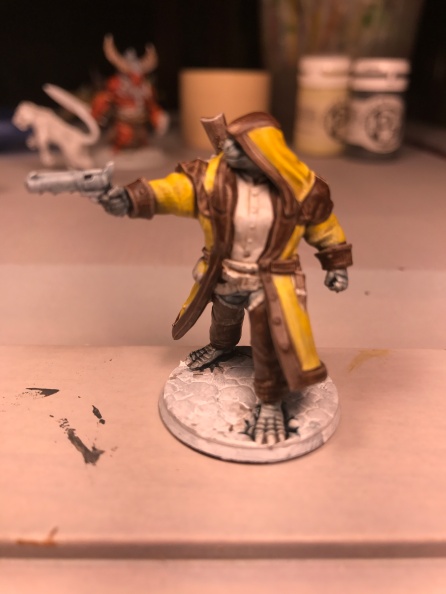 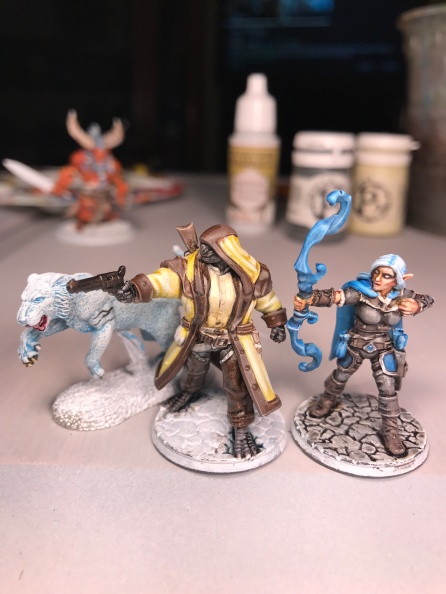 Several shading and highlight passes, the figures are coming together! Oh, and Maren’s character has a liger companion. Great Reaper miniature!

I have been painting miniatures for some game or another since 1983. I remember painting some old Ral Partha figures, which were made of lead at the time, and getting really frustrated with how poorly my Testor’s model enamel paints stuck to the metal. It’s been a while. I’ve learned a few things, and I don’t think I ever came down with lead poisoning!

I picked up the Imperial Assault boxed set and quite a few expansions. The miniatures from Fantasy Flight games are really nicely done, and capture the essence of Star Wars beautifully. While I do wish there was a little more variety with “mob” figures, I understand the need to keep costs down.

I have been waiting for things around the new house to settle into their routine before breaking out the paints, and now… that time has come.

The first three models are a Rodian, (I freaking LOVE Rodians) a Weequay, and a Trandoshan. I wanted to get some color on these little dudes without going too crazy on details… I have four of each of these to paint up, so I will be varying the color schemes in each run. 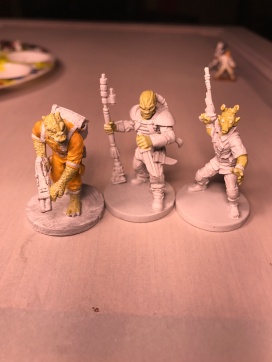 Starting to block in color. 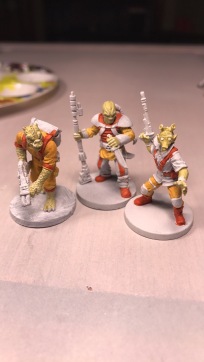 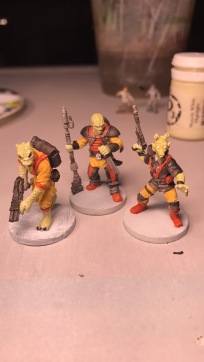 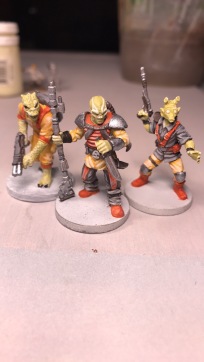 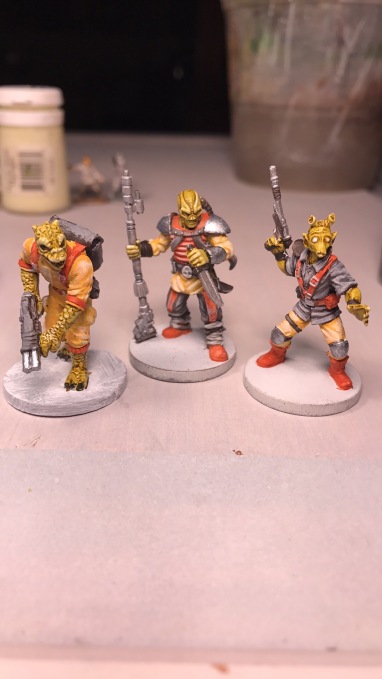 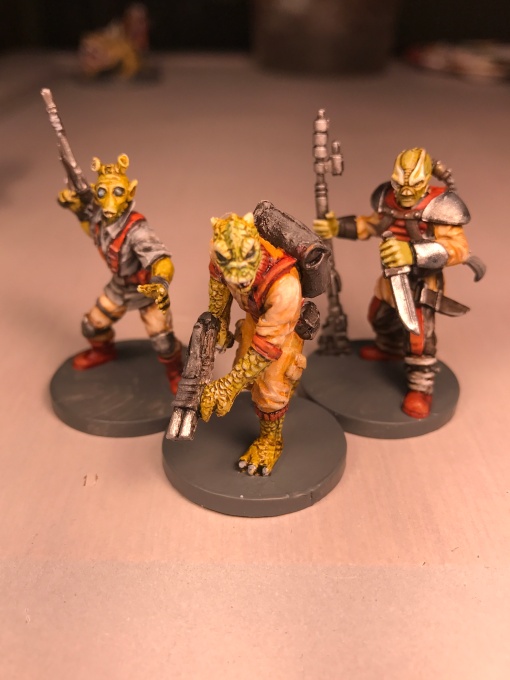 Some of the art from last week’s posts featured lots of cute little animals in stylish mod clothing. Aside from monsters, that’s just about my favorite thing to draw. The first batch was for a shirt, but while I was drawing those, I started investigating Redbubble as a print option for my art.

I have used several other services, and while decent, none really grabbed me. I ordered some stickers featuring those same animals, and a couple of Gorinka images, and crossed my fingers. 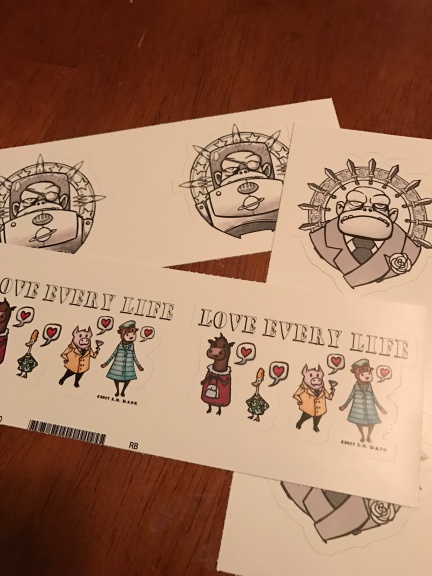 I really couldn’t be happier; the colors on the animals pops nicely, the screens on the Gorinkas are crisp, and the stickers themselves are a really nice vinyl. I ordered these about 5 days ago, and got them today in a cool little mailer. Color me happy.

Change of course coming up for the next few weeks, as I have some miniature commissions to get to. I will, however, be posting progress pictures and reports here just for fun!

After finishing up the vegan tee shirt design, I decided to work some other animals into the series. The first thing I noticed is that my style has changed, which is most likely due to using a tablet to draw on now. The warthog and otter are the first of a new series, and will be worked into a story that has been percolating in the back of my head for nearly 20 years! 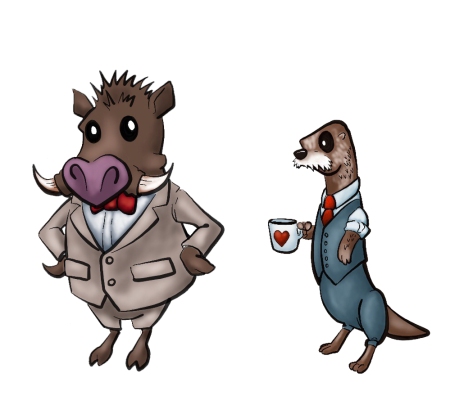