I have long been a fan of Arthurian legends. I really enjoy getting into the roots that prop all of these tales up, from ancient Welsh mythology to old tropes that different cultures would trade about in their oral traditions. It’s a lot of fun for me, and I’ve been wanting to do my own book of Arthurian tales since I was about 20.

With David Ayer directing the new Green Knight movie for A24, I was able to geek out a bit about the story of Gawain and the Green Knight, one of my absolute faves. It has just a little bit of everything peppered into the story, from impossible contest to ridiculous trading games. And woven throughout is the concept of honor, and what honor, or a life without honor, would mean to any knight of the Round Table.

I drew my own rendition of the Green Knight, which you can watch with the video I have attached to the story. I also tell the beginning of the story, which finds Gawain rashly choosing to agree to a game with an obviously supernatural being.

During the earlier part of November I was able to fulfill a long-standing, bucket-list level personal wish and spend a few hours wandering through Guillermo Del Toro’s collection of monster and comic book ephemera. It was, to put it mildly, a life changing experience.

We arrived at the LACMA early on a Saturday morning, and were greeted by a statue of this fellow:

That was just the beginning. A whole wing of the museum had been set aside to showcase the collection of my absolute favorite director. I saw props from movies going back to the beginning of the art form. Wax statues wearing actual costumes from movies like the Bride of Frankenstein, Crimson Peak, and Hellboy.

There where original pages from comic books going back to the 1960’s, and statues of genre giants like Ray Harryhausen, H.P. Lovecraft, and Edgar Allan Poe. The Poe statue was pretty cool, and the room he was in was full of Victoriana. And a really weird wax of someone I couldn’t place. He was propped up against the wall, like some sort of diminutive, vaguely Asian Tor Johnson wannabe. He was also one of the few standing waxes, and the only one propped against a wall.

I got a little closer to the Poe, trying to figure out who the dude against the wall was. I needed to be a little sneaky, since there were super cool film nerds all over the place, and the last thing I wanted to do was let on that I didn’t know who this guy was. Just look at him, though: He had to be someone…

I got closer to the guy, and right when I was about 5 inches away, he reached up, scratched his nose, and went back to sleep. I choked back a scream, and tried to act like my sudden ability to levitate was perfectly natural.

My wife pointed out his ID badge, and really, it should have been a pretty strong clue to his being a real, live human being. Then again, he looks like a freaking wax statue, and if there is anything I have learned from Westworld, I really shouldn’t take any chances, right?

Regardless, it was the visit of a lifetime. I wish we had more time, and that the building had been empty. It was really hard to stand and gawk at everything for the appropriate amount of time. I could have spent an hour looking at these guys alone:

I don’t normally post links to news articles, and links to Buzzfeed? Not going to happen much at all. But this one story is too much up my alley to pass up.

Clowns. In the woods. Calling out to kids…

Seriously, read the story. If this isn’t a hoax, it’s about the freakiest real-world thing I have read about in a long time

Here is the story from the local news source in Greenville, South Carolina. My favorite part of the story?

The deputy who compiled the report also wrote that several children said they “believe the clowns stay in a house located near a pond at the end of a man-made [trail] in the woods.”

I’m a pretty compassionate guy, and I would love for everyone in the world to be able to do their thing and not have to deal with the judgement of others for it. But CLOWNS? IN THE WOODS? And they have a squat-house by a pond? There is no amount of gasoline that could deal with this.

I am pretty much doomed.

Not in some theological “I really should have done that one thing instead of that other thing” sort of way. More like a “these are so freaking cool I am going to sell all my blood to buy them” sort of way. I’ll get back to that in a minute.

Look, I love monsters. Anyone who has checked out more than one post on this page knows that. Anyone who knows me personally really knows that. And by monster, I am an equal opportunity enthusiast of anything in the para-zoological sphere; give me your faeries, your kelpies, your poor huddled goblins.

So, when someone does something monstrously cool, I kind of fall for that project. Yesterday, I stumbled upon Mythic Articulations. Check this out: 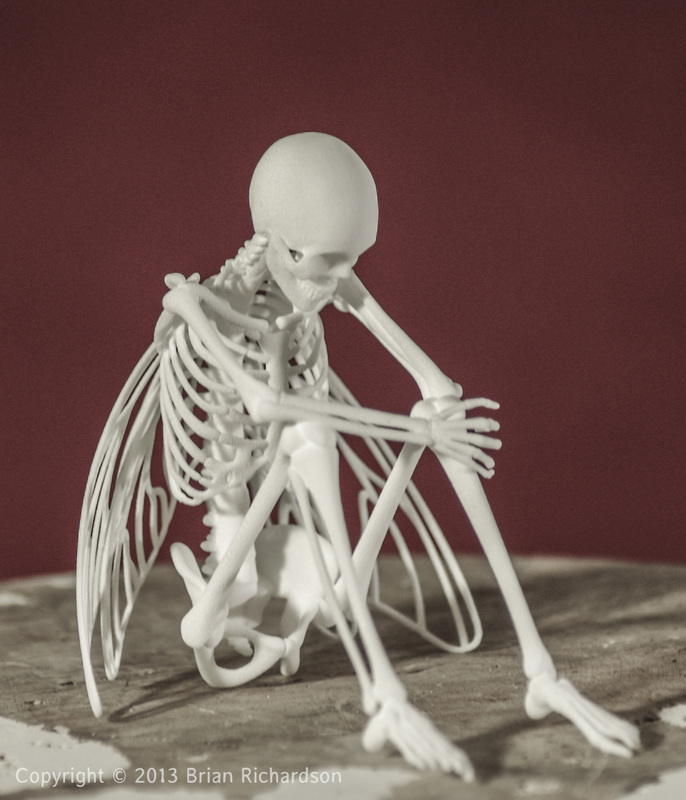 That’s the skeleton of a wetland fairy. I can’t get over how cool this is! Could you imagine having one of these sitting on your desk, or under a glass dome? I’m thinking about getting one and using some acrylic glazes to give the bones a patina.

This little bundle of nightmare tonic is the Tooth Fairy skeleton, and seriously couldn’t be any cooler!

I was wandering around the site, checking out the cool skeleton art posters, skulls, and the other monster skeletons when I saw something that took the air right out of me. How freaking cool is this? 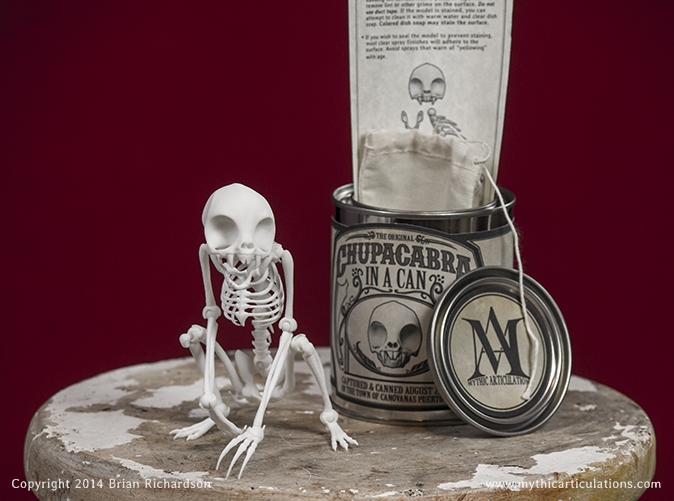 Yeah, that’s a Chupacabra skeleton in a can. It’s a model kit, kids. And because the folks at Mythic Articulations made the bones with ball-socket connectors, these kits are completely poseable.

Here’s a werewolf for those of you into more traditional horror tropes. I prefer the fairy skeletons, personally; I really want to fill my studio with little skeletons under glass!

The price range might seem a bit steep on the surface; most of the skeletons are over $60, but there are art prints and books available for less than $30. Compared to a lot of collectibles they are actually pretty affordable, and your money is supporting a small business that creates unique and imaginative art.

Mythic Articulations uses state of the art 3-D printing technology, and makes each monster to order. You can check out all of their monsters here, or purchase them directly from their Etsy shop.